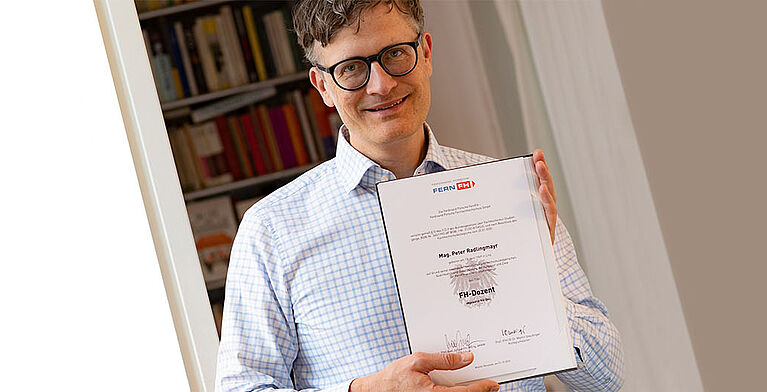 „Generally, I do not really care about academic titles. But to be awarded with the “FH-Dozent” title at the Distance-Learning University of Applied Sciences for me means that my enthusiasm for teaching and my work with the students has been recognised,” says a happy Peter Radlingmayr after having received the distinction. The industrial psychologist and psychotherapist has been teaching both the bachelor and master degree programmes in “Business Administration and Psychology” at the FernFH since 2010. He was recently awarded the title “FH-Dozent” for his achievements and services from Austria’s first Distance-Learning University of Applied Sciences. “Peter Radlingmayr confronts and engages his students with current issues from real life with his expertise, while creating an awareness for state-of-the-art research at the same time,” says Christa Walenta, Deputy Head of Academic Board at the FernFH.

Peter Radlingmayr has worked as a psychologist within the human resources area for more than 25 years. He started teaching at the Distance-Learning University of Applied Sciences ten years ago, because it offers him the opportunity to pass on his extensive experience and expertise in a practice-oriented way. “And, if I may add: the diversity of my students has always enriched my life, both personally and professionally,” reveals Radlingmayr.

The recent distinction is already the second award that Radlingmayr received for his work at the FernFH. In 2015, the psychologist won the price for “Exzellentes Distance Learning” for his course on “Talent Management”.