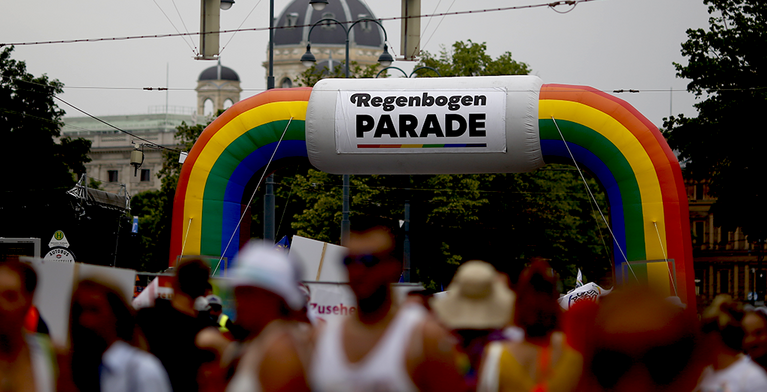 The “queer@hochschulen” network was represented at EuroPride 2019 with a stand at the Pride Village on Rathausplatz and a truck in the Rainbow Parade.

“Together & proud” was the motto of EuroPride2019, that took place in Vienna the previous Saturday. Around 500,000 participants celebrated and took part in the Rainbow Parade demonstrating for acceptance, tolerance and equal treatment of the LGBTIQ*Community (lesbian, gay, bi, trans, inter, queer). As a member of the “queer@hochschulen” network, FernFH was there to give their support as well. “Diversity is very important to us, we support and encourage it,” says Ingrid Wahl, Gender & Diversity representative of FernFH. To show everyone this, we also flew the rainbow flag outisde FernFH in Wiener Neustadt in June, “it will be put up again next year as well”, Wahl said.

“queer@hochschulen” (along with FernFH) was represented with a stand at the Pride Village on Rathausplatz as well as with float in the Rainbow Parade. In the Pride Village, visitors to the “queer@hochschulen” stand were able to find out about the various LGBTIQ* groups at the universities, and badges with slogans such as “Diversity makes you smart” or “Homophobia is a curable disease” were distributed.

At the parade on Saturday, “queer@hochschulen” attracted a lot of attention with a truck decorated with portraits of queer scientists. Various DJs provided the party atmosphere during the procession around the Wiener Ring. “However, this event is more than a simple celebration – it’s important to stand up for the rights of the LGBTIQ* community and in doing so set an example for diversity”, emphasises Ingrid Wahl.